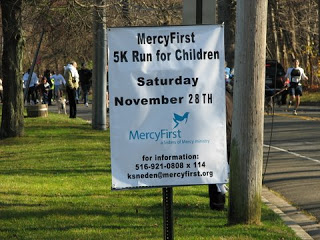 The weather report said temperatures would be in the high 40’s with winds gusting up to 50 MPH at the start of today’s race. I was curious to see how that would translate in terms of running conditions. The weatherman said it could feel like freezing temperatures when the wind was that high. My wife surprised me on Wednesday with a gift of a Nike long sleeved running shirt and a pair of high quality compression running pants. I am no fan of Nike’s shoes but I think their apparel is top notch. On Wednesday I was thinking that these clothes would be perfect for December’s cold but this morning’s weather made me think that today would be a good day to put them to use. I wore my Zoot short sleeve jersey over the new long sleeved shirt to ward of the sharp chill from the wind.

The race was was so close to home it only took us 5 minutes to get there. The winds were strong and it felt cold. Fortunately registration and the exhibits were set up inside the school so me, my wife and kids were able to stay warm up until a few minutes before the start. This year they had a category that included runners and their dogs so there were many woofs heard among the runners. Smartly, they had the dog participants leave two minutes after the two-legged start. It was chilly at 10 AM and we got off fast because the course starts downhill. I was careful to maintain a moderate-to-brisk pace as I had learned a lesson in previous races that a fast start can lead to a painful finish. The length of a 5K gave me some latitude for pushing hard compared with a 5 miler or 10K and I did make my way by a number of people over the first mile. Unlike other races, I didn’t get the feeling that what lay ahead would be painful. However, I was concerned that so many cars were driving on the main roads while we ran alongside. Happily there were no close calls.

The course had a few hills that I thought might prove difficult but I came through them comfortably and even passed a few people during those segments. At one point, when I was a mile from the end, I started wishing the race was longer because I was enjoying the experience so much. I did get passed by a few people including some very fit runners who had dogs on a tether. After starting mid-pack I finished in the top 20% so for once I enjoyed the experience of passing more people than passed me. At the end I sprinted the last 100 yards to beat out two runners to the finish, one of whom had overtaken me right before that. As I ran past the finish line I saw my family waiting and cheering loudly: my payoff for that extra effort.

So November Emerging Runner beat May Emerging Runner by a decisive margin today. I’m pleased by that and proud of the six races that I’ve run this year. Next year I will likely race at some distances I ran in 2009 and I’ll have a chance to beat myself at 4 miles, 8K and 10K. But today I’ll enjoy the 5K ‘victory’ and will revel in the fact that my performance is going in the right direction.