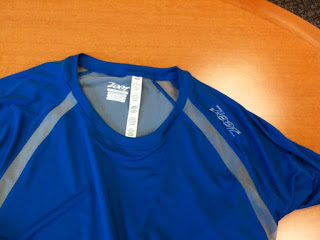 I was out after lunch yesterday in the mid-town heat so I stopped into City Sports to cool off a bit. Okay, it was very hot outside but I don’t really need an excuse to stop into that store. What I like about City Sports is that, while they stock plenty of gear for other sports, they have a big running section that greets you right as you walk in. Since most of my athletic wear shopping takes place in the suburbs at Sports Authority, Dick’s and Target (their Champion running stuff is a very good value for the price) or in private running stores that have less selection and (understandably) higher markups I appreciate the expanse and brand diversity at City. The only other place I’ve seen such choice is Paragon in Union Square but City Sports is just two blocks away!

My intention was not to buy anything during that visit. I really like looking at running gear and it’s interesting to see brands like Sugoi and Craft displayed along with apparel from Mizuno, Brooks, Pearl Izumi plus the more common suppliers. One brand that caught my eye a few months ago is Zoot, a company that makes performance apparel primarily for triathletes. Hanging seductively in their section has been an Ultra Tech Tee that is so sheer that it almost doesn’t exist. I imagined that this would be the perfect running shirt – light as a feather but with venting, sun protection and wicking capabilities. The only reason I never bought it was its sizable cost that I felt was just too high a price to pay for an item that is likely to be outweighed by a honey bee. As I looked at the racks I noticed signs indicating that a clearance sale was going on and I gravitated to the Zoot section only to see that this shirt was marked down quite a bit. Even so I hesitated to buy it, I probably have six or seven running shirts already and two, my Nike Sphere and Adidas adiZero shirts, are excellent for competition. I then thought about what my wife would say if she was standing there: “Go ahead, you’ve been looking for an excuse to get it. If it was me you’d say to buy it.” So I did.

I’m glad I did. I remember reading a comment on my Runner’s World blog from someone who said he buys a new shirt for every race. That sounds about right but I think I’m done for now. I invested in some good cold weather gear last year and now I’m fully equipped. Of course my Brooks running shoes are almost five months old so maybe its time to start thinking about their replacement…