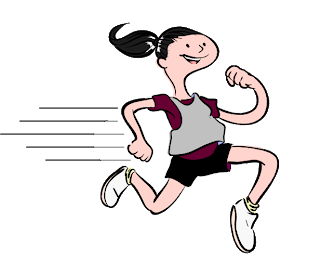 I went for my second run in Central Park this week, this time accompanied by Adventure Girl. She was due to fly out later so we decided to do our usual work week ending run a day early. As we made our way into the park we talked about our run plan. AG noted that I’m constantly mentioning my need to improve my speed. She suggested that we proceed at a faster than normal pace and either incorporate some tempo changes or finish the workout with some intervals. I decided that the tempo method was better because I knew that I’d spend the whole run worrying that I’d have the energy to do speed drills later.

We started with a brisk pace and with the temperature in the low 70’s it felt just right. Shortly into the run AG pointed to a sign and said “We’ll sprint from that sign until we reach the lamp post, slow down for recovery for three more lamp posts, and repeat.” When we reached the sign we both took off, I ran hard but AG was a blur, gaining about three feet per second on me until she reached the marker. I’ve always been a good sprinter so it was interesting to be the slow one. AG has clearly honed that quickness on the soccer field where your ability to burst is key. It was a little humbling but I wasn’t humiliated because I felt good and I knew I was running well.

We ran four sets and then resumed a good steady pace, faster than what we usually run. We continued north past the lower loop and cut west across the Great Lawn before turning south toward our designated end point. We encountered some hills but they didn’t slow us down much and near the end AG took off for the finish and I sped up but did not nearly match her pace. I actually lost sight of her and passed her while she waited at the end. If I didn’t hear her call out to me I would probably have kept on going for a while.

It was a great run and I felt good about my speed progress. My daughter mentioned the other night that the expression “Run like a girl” is offensive. She’s right, it can be. But to me it’s an aspiration.