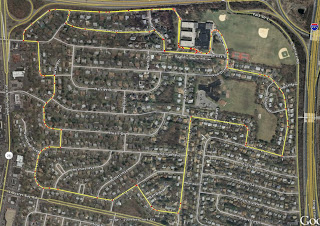 As I backed out of my garage this morning to head to the track I noticed that the temperature display in my car said 42 degrees. In the seven minutes it took to reach the track the reading had dropped ten degrees and with strong winds I figured the chill brought that down at least ten degrees more. I was prepared for the weather but not for what I saw when I arrived – the entire track was covered in icy snow. I got back in the car and headed straight back home.

It’s been a couple of weeks since I’d run outdoors due to snowstorms that seem to happen every weekend. I was determined to get back on the track or street so I hit my neighborhood roads which were sandy and dirty but mostly clear of snow and ice. After a few weeks on treadmill duty it was disconcerting to encounter freezing cold winds but it really felt like running. I thought about some of the runners I’ve heard from recently in places like Michigan where it’s been 5 degrees. If they’re out there running I really can’t complain. I ran 3.6 miles and felt strong throughout the run and finished better than I have in a long time. Maybe my conditioning has improved.

I was happy that my starting struggles did not follow my return to road running. I thought the wind resistance and hills would slow my speed but I was surprised to see I ran 20 sec./mile faster than I’d been averaging on the treadmill. I’ll do another neighborhood run tomorrow to see if I can exceed 4 miles, a distance I’m hoping to achieve at least once a weekend until my April race.